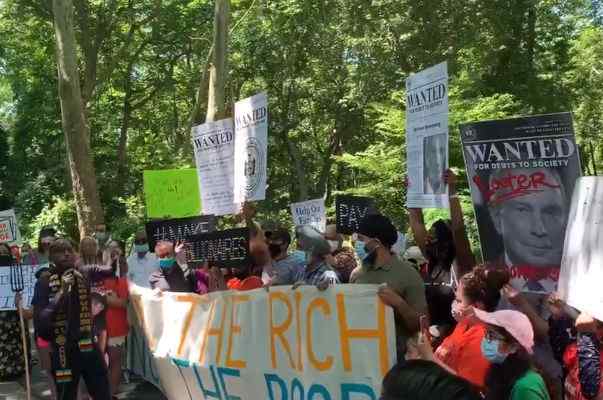 (Breitbart) – Bad news for wealthy New York elites looking to avoid protesters by fleeing to The Hamptons. The pitchfork-wielding mob has found you, and they’re not backing down.

A group of more than 200 protestors on foot and in cars reportedly invaded The Hamptons on Wednesday, singling out the homes of billionaire and failed presidential candidate Mike Bloomberg, Blackstone CEO Steven Schwarzman, and real estate developer Stephen Ross, according to reports from the New York Post and Newsday.

Pitch forks are out at @MikeBloomberg’s Hamptons house.

Rent is due today and billionaires are livin it up in the Hamptons. #CancelRent #MakeBillionairesPay pic.twitter.com/unC1E8UxnT

The so-called Hamptons Billionaires Car Caravan Protest said in a Facebook post that they are demonstrating against inequality.

“They take our land to build golf courses, profit from the ravages of COVID-19, buy politicians, exploit our labor and give money to the cops that continue to brutalize us,” the Facebook post said. “Rather than raise taxes on the rich who can afford it, Governor Andrew Cuomo makes schools, hospitals and those who need housing, pay — then keeps the budget for the police state intact.”

Some of the protesters carried plastic pitchforks while others brought “Wanted” signs with Bloomberg’s face on them.

“Tax the rich, not the poor!” the protesters reportedly yelled outside Bloomberg’s palatial Southhampton home. Some of the demonstrators called the former presidential candidate a “looter.”

The protestors reportedly are demanding that Gov. Andrew Cuomo hike taxes on the state’s billionaires to make up for the revenue shortfall created by the Chinese coronavirus pandemic. They were also upset about the governor’s proposal to slash 20 percent in state funding from schools, hospitals, and public housing agencies.

“Billionaires are experts in social distancing,” Alicé Nascimento of New York Communities for Change told The Post. “They’ve chosen to live in their own world and are separate from realities of everyday people and the people whose lives they have a tremendous impact on.”