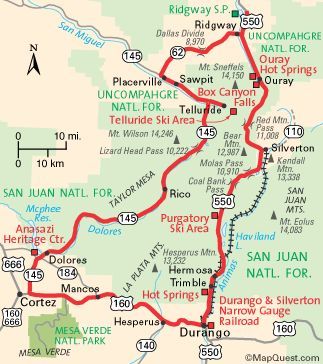 The winding US highway 550 is also known as The Million Dollar Highway, running all the way from New Mexico to Colorado. Part of the San Juan Skyway, this highway was built in the late 1880’s, and it is one of the most spectacular drives in the USA. The Million Dollar Highway section connects Ouray and Silverton and is lined with many small adventure towns and ghost mining villages.

The road was originally created by Otto Mears as a toll way in 1883 and operated as such until the 1920s when it was rebuilt. Historians aren’t certain of why this highway has its name. One explanation is that an early traveler was so overcome by vertigo on the steep and winding stretch of road that he insisted he would never travel it again, even if he was paid a million dollars.

The design of the road offers stunning panoramic views of the surrounding Colorado landscape and the San Juan Mountains. The surrounding wilderness is home to many creatures including black bears, deer, elk and mountain goats, so keep your eyes peeled for animal sightings along the way. This journey takes you winding and weaving through the mountains, clinging to tight curves with breath-taking views. It climbs up three very steep high mountain passes: Red Mountain Pass (at a stunning elevation of over 11,000 feet), Molas Pass and Coal Bank Pass. Higher altitudes will cause your ears to pop.