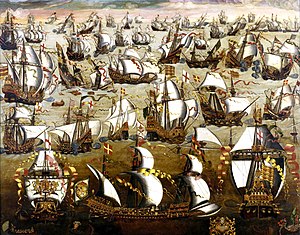 It was on 20 May that the Spanish Armada set sail to invade Protestant England.

Phillip Launches the Armada
Phillip II of Spain called the Catholic world to a Crusade against Protestant England. It was English gold and support that bolstered the Protestant cause in Scotland and Netherlands. With Phillip having conquered Portugal and expanded Spain’s Atlantic power, he ordered his admirals to assemble an Armada which could crush the Protestants in England once and for all.

“The Invincible Armada”
By May 1588 Phillip had prepared a fleet consisting of 130 ships, 2,400 cannon and over 30,000 men. This was the greatest naval force the world had yet seen. It was called “The Invincible Armada.” The plan was for the Armada to sail up the English Channel, pick up troops from the Spanish Netherlands under the Duke of Parma and escorting his invasion barges across the Channel to conquer England. Queen Elizabeth ordered the entire nation to pray for God’s intervention and protection against the invading Spanish Armada.

What was at Stake
Had the Spanish Armada succeeded, today’s world would be unrecognizable. Spain was the Catholic superpower. England led the Protestant cause. All Europe feared Spain. It had overwhelmed all of its adversaries – even the Turk. Had the Armada succeeded the whole subsequent history of England and Scotland would have been dramatically changed. There would have been no Protestant North America and no Anglo-Saxon civilization. It would have made Spain the unrivalled world superpower and Spanish the world’s language.

One of the Greatest Speeches Ever Made
An English army of almost 20,000 men were assembled at Tilbury to oppose the anticipated 30,000 men in the Spanish Armada. In addition to this a further 15,000 Spanish troops under the brutal Duke of Parma were to be ferried across the Channel in barges from the Netherlands.

Queen Elizabeth addressed her soldiers at Tilbury with these words: “I am come amongst you, as you see, resolved, in the midst and heat of the battle, to live or die amongst you all, to lay down for my God and for my Kingdom and for my people, my honour and my blood, even in the dust. I know I have the body of a weak and feeble woman, but I have the heart and stomach of a king and of a King of England too and think foul scorn that Parma or Spain or any prince of Europe should dare to invade the borders of my realm; to which, rather than any dishonour should grow by me, I myself will take up arms, I myself will be your general, judge and rewarder of every one of your virtues in the field.”

The English Navy
The Royal Navy had been under the control of Sir John Hawkins since 1573. He had rebuilt and reorganized the Navy that had survived from the days of Henry VIII. The castles which had towered above the galleon decks had been cut down. The keels were deepened. Designs concentrated on sea-worthiness and speed. Most significantly of all, Hawkins had installed heavier long-range guns. Knowing that he could not out-produce the Spanish in terms of the size and number of galleons, Hawkins was determined to batter the enemy from a distance with the superior range of his cannon. The Spanish Armada carried many cannon (2,400) but these were really only suitable for close-range salvos before grappling and boarding enemy vessels for hand-to-hand combat.

Against All Odds
To oppose the Armada’s 130 ships, Hawkins had 34 vessels, carrying 6,000 men. His commanders were Lord Howard and Sir Francis Drake. (It was Sir Francis Drake’s famous raid on the Spanish Armada in port at Cardiz in 1587 which had delayed the sailing of the Armada by destroying a large quantity of ships and stores. This was described as “the singeing of the King of Spain’s beard!”)

The Armada Sets Sail
The Armada finally left Tagus on 20 May. It was afflicted by severe storms. Two of their 1,000 ton ships lost their masts. They had to put in to refit at Carunna and could not sail again until 12 July.

Fires Over England
An Intelligence Report of 21 July from Howard to Walsingham reported sighting 120 sail vessels including galleys “and many ships of great burden.” Beacons were lit all across England to alert the population to the danger. Church bells rang. Special services were held to pray for God’s protection.

Engaging the Enemy
The English engaged the Armada in a four-hour battle, pounding away with their long range guns, but staying out of range of the Armada’s cannon. There was a further engagement on 23 July and then off the Isle of Wight on 25 July. The guns of the English ships raked the decks of the galleons killing many of the crew and soldiers.

Fire Ships Cause Panic
On 28 July the Spanish Armada anchored in the English Channel near Calais. As the English Navy lay upwind from the Spanish, they determined to set adrift 8 fire-ships, filled with explosives, to drift into the crowded Spanish fleet at anchor. As the Spanish crews awoke to see these flaming ships drifting towards their anchored Armada, they panicked. Spanish captains cut their cables and made for the open sea. Many collisions followed. The surviving ships of the Armada headed eastwards to Gravelines expecting to link up with Parma’s troops and barges, ready to be escorted for the invasion of England. But the tides and winds were against them and they found no sign of Parma’s troops in Dunkirk harbour.

Decisive Engagement
At this point the Royal Navy caught up with the Spaniards and a long and desperate fight raged for eight hours. Howard’s men sank or damaged many of the Spanish ships and drove others onto the banks. The English reported that at this point they had completely exhausted their ammunition, otherwise scarcely a Spanish ship would have escaped.

The Devastated Armada
The remnants of the defeated Armada now fled northwards seeking to sail around the north of Scotland in order to reach Spain. They faced mountainous seas and racing tides. Westerly winds drove two of the galleons to wreck upon the coast of Norway. Ships that had been shattered by the English cannonades were now struck by storms. Another 17 ships were wrecked on the coast of Britain. Most of the once mighty Armada were lost before the battered survivors finally reached Spanish ports in October.

God Blew and They Were Scattered
Incredibly, the English had not lost a single ship and scarcely 100 men in the ferocious engagements against the Spanish Armada. Though limited in supplies and ships, the tactics of Hawkins and his admirals Howard and Drake, had been crowned with success. A medal struck to commemorate the victory bears the inscription: “Afflavit Deus et dissipantur” (God blew and they were scattered!)

Answers to Prayer
While churches throughout England were holding extraordinary prayer meetings, devastating storms had wrecked the Spanish plans. The Duke of Parma’s invasion barges from Holland were prevented from linking up with the Armada by Dutch action. The English tactic of setting fire ships amongst the huge Spanish galleons created confusion. Courageous action by the English seamen and continuing storms decimated and broke up the Spanish Armada. Most of what was left of Phillip’s fleet was devastated by more storms off the coast of Scotland and Ireland. Only a miserable remnant of the once proud Armada limped back into the Ports of Spain. 51 Spanish ships and 20,000 men had been lost. The greatest superpower at the time had suffered a crippling blow. The defeat of the Spanish Armada in 1588 marked a great watershed in history. It signalled the decline of Catholic Spain and Portugal and the rise of Protestant England and Holland.

A Victory for the Protestant Reformation
Before 1588 the world powers were Spain and Portugal. These Roman Catholic empires dominated the seas and the overseas possessions of Europe. Only after the English defeated the Spanish Armada did the possibility arise of Protestant missionaries crossing the seas. As the Dutch and British grew in military and naval strength, they were able to challenge the Catholic dominance of the seas and the new continents. Foreign missions now became a distinct possibility. Had the Spanish Armada not been defeated, Protestantism could have been extinguished in England and Holland. Then the whole future of North America would have been far different with Catholicism dominating instead of the Protestant Pilgrims.

A Watershed Event
By the grace of God, the destruction of the Spanish Armada in 1588 saved the Protestant Reformation in England from Spanish invasion, oppression and the Inquisition. The victory of Protestant England and Protestant Holland against Catholic Spain was absolutely essential for the founding of the United States of America and of the Republic of South Africa.

Bibliography:
A History of the English-Speaking People by Sir Winston Churchill, Cassel and Co., 1956.
The Great Christian Revolution by Otto Scott, 1995.
Elizabeth I by Jacob Abbott, 1876.
The Spanish Armadas by Winston Graham, Collins, 1972.