Putin’s Russia caught in US and Chinese double-pincer 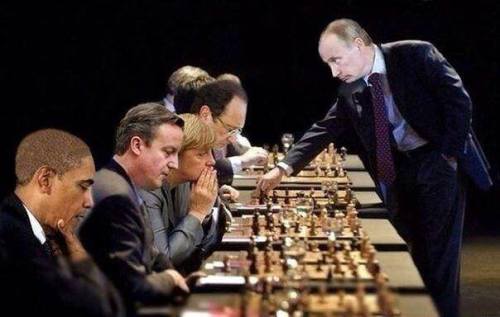 Russia’s Vladimir Putin has committed a grave strategic blunder by tearing up the international rule book without a green light from China. Any hope of recruiting Beijing as an ally to blunt Western sanctions looks doomed, and with it the Kremlin (Berlin: KMLK.BE – news) ‘s chances of a painless victory, or any worthwhile victory at all.
Mr Putin was careful to thank China’s Politburo for its alleged support in his victory speech on Crimea. Foreign minister Sergei Lavrov has been claiming with his usual elasticity that “Russia and China have coinciding views on the situation in Ukraine.”

This is of course a desperate lie. China did not stand behind Russia in the UN Security Council vote on Crimea, as it had over Syria. It pointedly abstained. Its foreign ministry stated that “China always sticks to the principle of non-interference in any country’s internal affairs and respects the independence, sovereignty, and territorial integrity of Ukraine.”

We don’t know exactly what China’s Xi Jinping told President Barack Obama at The Hague this week it clearly had nothing in common with the deranged assertions of the Kremlin. The US deputy national security adviser Ben Rhodes appeared delighted by the talks, claiming afterwards that Russia could no longer count on backing from its “traditional ally”.

If so, Mr Putin is snookered. He cannot hope to escape financial suffocation by US regulatory muscle, should he send troops into Eastern Ukraine or even if he tries to stir up chaos in the Russian-speaking Donbass by means of agents provocateurs.

Nor can he hope to turn the tables on the West by joining forces with China to create a Eurasian bloc, a league of authoritarian powers in control of vast resources. Such an outcome is the obsession of the ‘Spenglerites’, the West’s self-haters convinced that the US is finished and that dollar will soon be displaced by the Eurasian Gold Ducat — odd though that may seem at a time of surging oil and gas output in the US, and an American manufacturing revival.

The reality is that China is breaking Russia’s control over the gas basins of Central Asia systematically and ruthlessly. Turkmenistan’s gas used to flow North, hostage to prices set by Gazprom (MCX: GAZP.ME – news) . It now flows East. President Xi went in person last September to open the new 1,800 km pipeline to China from the Galkynysh field, the world’s second largest with 26 trillion cubic meters.

It will ultimately supply 65 BCM, equal to half Gazprom’s exports to Europe. Much the same is going on in Kazakhstan, where Chinese companies have taken over much of the energy industry. The politics are poignantly exposed in Wikileaks cables from Central Asia. A British diplomat is cited in a 2010 dispatch describing the “Chinese commercial colonization” of the region, saying Russia was “painfully” watching its energy domination in Central Asia slip away.

Yet more revealing is a cable quoting Cheng Guoping, China’s ambassador to Kazakhstan, warning that Russia and China are on a collision course, and China will not be the one to yield. “In the future, great power relations in Central Asia will be complicated, delicate. The new oil and gas pipelines are breaking Russia’s monopoly in energy exports.”

Mr Cheng not only expressed “a positive view of the US role in the region” but also suggested that NATO should take part as a guest at talks on the Shanghai Cooperation group — allegedly the Sino (Frankfurt: XTP.F – news) -Russian answer to EU/NATO — in order to “break the Russian monopoly in the region.” That word “break” again. So there we have it in the raw, what really goes on behind closed doors, so far removed from the pieties of a Moscow-Beijing axis.

There was much anguish about such an axis in the 1960s, then based on Communist fraternity. Henry Kissinger saw through it, suspecting that the two hostile cultures were at daggers drawn along their vast borders — “Four Thousand Kilometres of Problems” to cite the title of a 2006 opus by Moscow writer Akihero Ivasita.

George Walden exposes deep roots of this mistrust in his superb little book “China: A Wolf in the World?”. As a diplomat in Russia and then in China — one of the tiny handful of Westerners in Beijing through the Cultural Revolution — he saw first-hand how the Marxist brotherhood had come to loathe each other. Indeed, they came close to nuclear war. The CIA and State Department were dumbfounded by his accounts at a debriefing in Washington. They had no sources on the ground in Mao’s era.

Mr Walden says the Chinese have never forgiven Russia for seizing East Siberia under the Tsars, the “lost territories”. They want their property back, and they are getting it back by ethnic resettlement across the Amur and the frontier regions, much as Mexico is retaking California and Texas by the Reconquista of migration.

The population of far Eastern Siberia has collapsed to 6.3m from over 8 million twenty years ago, leaving ghost towns along the Trans-Siberian Railway. Russia has failed to make a go of its Eastern venture. With a national fertility rate of 1.4, chronic alcoholism, and a population expected to shrink by 30m to barely more than 110m by 2050 — according to UN demographers, not Mr Putin’s officials — the nation must inexorably recede towards its European bastion of Old Muscovy. The question is how fast, and how peacefully.

Jonathan Fenby, a China expert at Trusted Sources, said there is a faction within China’s National Security Council that wishes to “line up with Russia” over Ukraine, hoping to exploit the crisis to gain better terms on gas, food, and raw materials. These voices have been overruled by Xi Jinping. He plays on a more sophisticated strategic stage.

China is likely to walk a tightrope, “hiding its brilliance and biding its time” as the saying goes. This will becomes a harder if the Ukraine crisis escalates. Beijing may have to choose. It is surely unlikely that imperious Xi Jinping will throw away the great prize of G2 Sino-American condominium to rescue a squalid and incompetent regime in Moscow from its own folly.

Mr Putin must realize by now how fatally isolated he has become, and how dangerous it would be to go a step further. Even Germany’s ever-forgiving Angela Merkel has lost patience, lamenting an “unbelievable breakdown of trust.” Enough of Europe’s gas pipelines have been switched to two-way flows since 2009 to help at least some of the vulnerable frontline states, if he tries to pick off the minnows one by one. Eight EU countries have liquefied natural gas terminals. Two more will join the club this year, in Poland and Lithuania.

The EU summit text last week was a call to arms. Officials have been ordered to draft plans within 90 days to break dependence on Gazprom. Even if this crisis blows over, Europe will take radical steps to find other sources of energy. Imports of Russian may be slashed by half within a decade.

Capital (Other OTC: CGHC – news) flight from Russia reached $70bn in the first quarter. Russia’s central bank cannot defend the rouble without tightening monetary policy, driving the economy deeper into recession in the process. Russian banks and companies must roll over $155bn of foreign debts over the next twelve months in a hostile market, at a premium already over 200 basis points.

Mr Putin is discovering that global finance is more frightened of the US Securities and Exchange Commission than Russian T90 tanks. Any sanction against any oligarch linked to any Russian company could shut it out of global capital markets, potentially forcing default. Creditors in the West would be burned. But nobody cares about them once national security is at stake, something markets have been slow to grasp.

Nor has he chosen a good moment for his gamble. Europe’s gas tanks are unusually full. The price of oil is poised to fall — ceteris paribus — as Iraq’s output reaches a 35-year high, the US adds a million barrels b/d a day this year from shale, and Libya cranks up exports again. The International Energy Agency says global supply jumped by 600,000 b/d last month. Deutsche Bank (Xetra: DBK.DE – news) predicts a glut. So does China’s Sinopec. Mr Putin needs prices near $110 to fund his budget. He may face $80 before long.

At the end of the day he has condemned Russia to the middle income trap. The windfall from the great oil boom has been wasted. Russia’s engineering skills have atrophied. Industry has been hollowed out by the Dutch Disease: the curse of over-valued currency, and reliance on commodities.

He jumped the gun in Ukraine, striking before the interim government had committed any serious abuses or lost global goodwill, a remarkably sloppy and impatient Putsch for a KGB man. He took Germany for a patsy, and took China for granted. He has gained Crimea but turned the Kremlin into a pariah for another decade, if not a generation, and probably lost Ukraine forever. It is a remarkably poor trade.