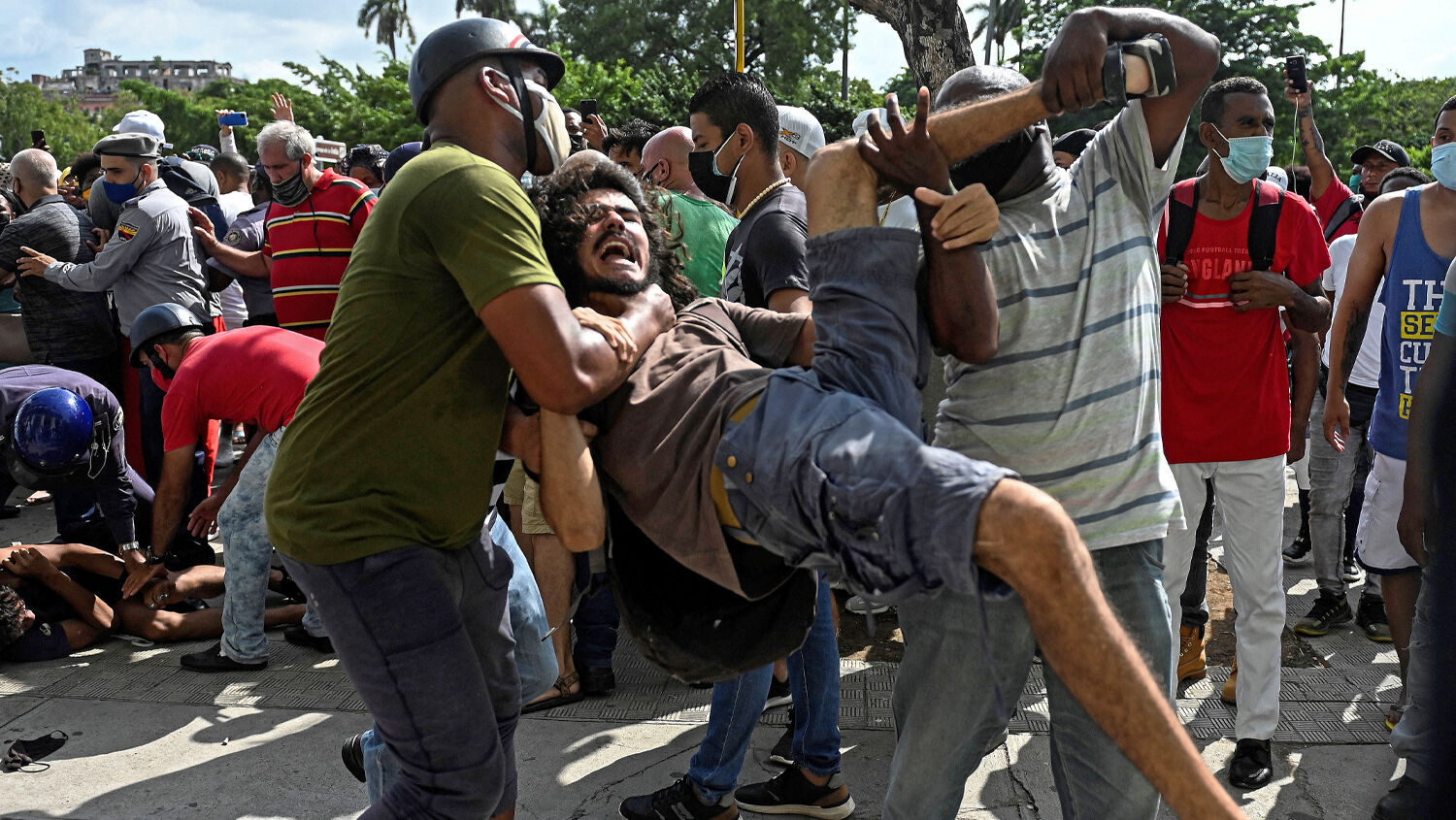 A man is arrested during a demonstration against the government of Cuban President Miguel Diaz-Canel in Havana, on July 11. YAMIL LAGE/AFP VIA GETTY IMAGES

Cuba’s suppression of the largest anti-government protests in six decades was made possible by China’s export of ‘digital authoritarianism.’ Now the Chinese are more deeply entrenched—just 90 miles from the United States.

“We are not afraid. We want change, we do not want any more dictatorship.” This was the statement a Cuban protester gave to the bbc last month as the largest protests in six decades tore across the island nation.

This protester, who insisted on anonymity, and tens of thousands of his countrymen had reached a breaking point. They understood that the severe shortages of food, medicine, electricity and basic supplies were the result of their government’s incompetence and corruption. So starting on July 11, they took to the streets in more than 40 cities to demand regime change.https://platform.twitter.com/embed/Tweet.html?dnt=false&embedId=twitter-widget-0&features=eyJ0ZndfZXhwZXJpbWVudHNfY29va2llX2V4cGlyYXRpb24iOnsiYnVja2V0IjoxMjA5NjAwLCJ2ZXJzaW9uIjpudWxsfSwidGZ3X2hvcml6b25fdHdlZXRfZW1iZWRfOTU1NSI6eyJidWNrZXQiOiJodGUiLCJ2ZXJzaW9uIjpudWxsfSwidGZ3X3NwYWNlX2NhcmQiOnsiYnVja2V0Ijoib2ZmIiwidmVyc2lvbiI6bnVsbH19&frame=false&hideCard=false&hideThread=false&id=1421576682075533312&lang=en&origin=https%3A%2F%2Fwww.thetrumpet.com%2F24424-china-exports-tyranny-to-cuba&sessionId=d58d0495a9ea06feaeb8ac5e325305672ceb6aec&siteScreenName=theTrumpet_com&theme=light&widgetsVersion=1890d59c%3A1627936082797&width=550px

Seeing the unprecedented numbers that had come out filled many protesters with hope. From Havana to Santiago de Cuba, they chanted: Freedom! Yes we can!

But the Cuban regime answered: Tyranny. No, you can’t.

The government shut down the protesters. And a new report shows that it did so thanks largely to the Chinese Communist Party (ccp).

Cuba has only one Internet access company: Etecsa. And the main technology providers for Etecsa are all Chinese: zte, Huawei and TP-Link. These Chinese firms—all of which are de facto extensions of the ccp—played a major role in building Cuba’s telecommunications networks, including its national fiber-optic network, undersea cables, hot spots and mobile Internet.

Back in 2016, the China Business Network boasted that Beijing’s contributions to Etecsa made China’s position in Cuba “as firm as a rock in midstream.”

Last year, the Chinese were found to be using this rock-solid position to export the ccp’s “digital authoritarianism” to the Cuban regime. An investigation by the Swedish Qurium organization proved that China was enabling Cuba’s government to block its people from viewing regime-critical websites—just as China does with the “Great Firewall of China” within its own borders.

Last month when the protests broke out in Cuba, the regime understood that the demonstrators were relying on social media and mobile Internet (which they have only had on the island for three years) to coordinate marches, warn each other of secret police, and broadcast their message beyond the island. In order to disconnect the Cuban people from each other and the wider world, the regime pulled the plug on Internet and mobile networks, and selectively cut landline phone service.

Within days of the Internet blackout and accompanying government crackdown, the protests fizzled out. The Cuban regime then set to work identifying demonstration leaders and tightening its grip on the island.

This technology shutdown could not have happened without China. “The key to the regime’s ability” to orchestrate the blackout “was China,” Leland Lazarus and Evan Ellis wrote for the Diplomat on August 3.

China’s role in suppressing the Cuban people and prolonging the hardships they suffer at the regime’s hand is shameful. But it also considerably deepens China’s power in Cuba, and therefore presents a danger to the United States.

Geopolitical Futures founder George Friedman warned in July that China’s influence in Cuba, which has expanded significantly thanks to China’s role in squelching the protests, means the Chinese could potentially “block American ports without actually blocking them.”

The choke points are the waters between Cuba and the Yucatan Peninsula and between Cuba and Florida. The port of New Orleans and the port of Houston depend on these two outlets to ship and receive critical commodities for the United States. … From Cuba, a long-term threat could be maintained … It is an ideal place from which to manage the U.S. ….

In a March 2019 article titled “Preparing to Storm America’s Castle,” the Trumpet warned of the same potential threat. We wrote:

[T]he Caribbean is vital to U.S. security. This sea not only connects the East Coast with the Pacific Ocean via the Panama Canal, it guards the mouth of the Gulf of Mexico. Half of America’s seaborne trade passes through the Gulf. So a foreign power that controls the Caribbean could cripple the U.S. economy by restricting its access to oceanic shipping.

This geographic reality is why Russia and China want to challenge U.S. dominance in the Caribbean. These aspiring superpowers are forging alliances with socialist governments in Cuba, Nicaragua and Venezuela. If these Latin dictatorships become staging grounds for Russia and China, a coalition of nations could potentially cut off U.S. access to the Panama Canal and seal off the Straits of Florida and the Yucatán Channel.

As disturbing as this possiblity sounds, Bible prophecy reveals that such a besiegement will soon happen.

More than 2,500 years ago, God inspired the Prophet Isaiah to write about a huge trade bloc that would be formed in our lifetime: “a mart of nations” (Isaiah 23:3).

Verse 1 shows that a lead nation in this trade bloc would be “Chittim.” Trumpet editor in chief Gerald Flurry explains in his booklet Isaiah’s End-Time Vision that Chittim, or Kittim, is an ancient name referring to modern China. Another leading power in the trade bloc is “Tyre,” which Mr. Flurry explains refers to “the commercial center” of modern Europe. A companion passage in Ezekiel 27 mentions ancient names for Russia (Tubal and Meshech), showing that Vladimir Putin’s Russia will also play a major role in this future “mart.”

“The Bible contains many prophecies of that European power attacking America—and many other prophecies of America being besieged,” Mr. Flurry writes in Isaiah’s End-Time Vision. Europe will carry out this besiegement by working with the other nations associated with the mart of nations of Isaiah 23 and Ezekiel 27, including China.

“All of them are going to besiege America, Britain and the Jewish nation,” he writes.

The “giants of Asia” will form a “brief alliance” with the European bloc, he writes. “Should Europe, the resurrected Holy Roman Empire, find a way to take advantage—even for a moment—of key resources and strategic holdings of China, Russia and Japan, it would have more than enough power to besiege the Anglo-Saxon nations ….

“This is why Isaiah’s prophecy of an end-time ‘mart of nations’ that includes both European and Asian powers is so intriguing.”

Mr. Flurry draws careful attention to the Latin American region, due mainly to its proximity to the United States. “Herbert Armstrong long prophesied, and we expect, the alliance between Europe and South America to grow extremely strong,” he writes. Europe already wields significant influence in parts of Latin America. And after China joins this “brief alliance” with Europe, the power that China is now building in Cuba and elsewhere in Latin America will translate into even greater European control over the region.

“Preparing to Storm America’s Castle” explains the meaning of “gate” in this context:

A gate is a narrow passage of entrance or exit. When speaking nationally, a sea gate is a narrow choke point like the Panama Canal, the Straits of Florida, the Windward Passage or the Yucatán Channel. God gave Britain and America these strategic gates and many others, ensuring that they would become economic and military superpowers. But God also warned that if America and Britain did not obey Him, then not only would these sea gates be taken away, but they would be used against them. This is about to happen.

These are grave prophecies, showing that America and some of its allies will soon suffer major calamity. But Bible prophecy reveals that the “mart of nations” and the time of worldwide calamity associated with it will be followed by an era of unprecedented global peace.