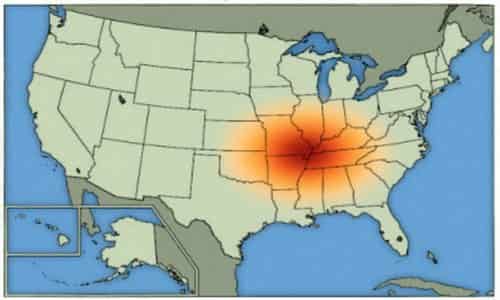 BY MICHAEL SNYDER – END OF THE AMERICA DREAM BLOG SEPTEMBER 12, 2016Share this article:

Did you know that Oklahoma was just hit by the largest earthquake ever recorded in the history of the state? And did you know that Oklahoma absolutely shattered their yearly record for earthquakes in 2015 and may break it again this year?
According to the USGS, the number of significant earthquakes in the eastern and central sections of the nation has more than quintupled in recent years, and concern is growing that we could soon see a “megaquake” in the middle part of the country.
Of course no discussion of megaquakes in the middle part of the country can leave out the New Madrid fault zone, which is approximately six times larger than the San Andreas fault zone in California.
Scientists assure us that the New Madrid fault is around 30 years overdue for a major seismic event, and when it does happen it is going to be the biggest disaster in modern American history up to this point.
Late last month, eight states took part in a major drill that simulated what the damage from a New Madrid earthquake might look like. The following comes from a news report that was posted on August 24th…
Eight states are taking part in a multi-state disaster drill Wednesday.
Missouri, Kansas, Nebraska, Iowa, Illinois, Tennessee, Kentucky and Arkansas all took part in the “Show Me Mass Care Exercise” to practice how they would react during a major earthquake along the new Madrid Fault Line, which is a major source of earthquakes in the Midwest and south.
As I mentioned above, the New Madrid fault zone is about six times bigger than the San Andreas fault zone, but because of the nature of the earth’s crust in the region, a New Madrid earthquake would be felt in most of the nation. In fact, the Missouri Department of Natural Resources says that earthquakes along the New Madrid fault “shake and damage an area approximately 20 times larger than earthquakes in California”…
Due to the harder, colder, drier and less fractured nature of the rocks in the earth’s crust in the central United States, earthquakes in this region shake and damage an area approximately 20 times larger than earthquakes in California and most other active seismic areas.
Even though large earthquakes occur much less frequently in the NMSZ than in California, the long term average quake threat, in terms of square miles affected per century, is about the same because of the approximately 20 times larger area affected in the central United States.

Back in 1811 and 1812, a series of earthquakes along the New Madrid fault were so powerful that they actually cracked sidewalks in Washington D.C. and rang church bells in Boston. Testimony from eyewitnesses to those earthquakes sounds like something from a post-apocalyptic science fiction novel…
The Midwest was sparsely populated, and deaths were few. But 8-year-old Godfrey Lesieur saw the ground “rolling in waves.” Michael Braunm observed the river suddenly rise up “like a great loaf of bread to the height of many feet.” Sections of riverbed below the Mississippi rose so high that part of the river ran backward. Thousands of fissures ripped open fields, and geysers burst from the earth, spewing sand, water, mud and coal high into the air.
In those days not many people lived in the middle of the country.
What in the world would such an earthquake look like today?
I also want to point out that there are 15 nuclear reactors sitting inside the New Madrid fault zone, so if a megaquake did hit the region we could be looking at Fukushima times 15.
And the earthquakes in Oklahoma (not a part of the New Madrid fault zone) just continue to keep getting bigger and bigger. The USGS now says that the earthquake on September 3rd was the largest ever recorded in the history of the state…
The earthquake that shook Pawnee, Oklahoma, on Sept. 3 is now the state’s largest temblor on record, according to the U.S. Geological Survey, which just upgraded the magnitude to 5.8.
The earthquake was previously pegged at magnitude 5.6. But further analysis of the seismic recordings from the event found the quake size to have a bigger moment magnitude, according to the USGS.
As I sit here writing this article, a magnitude 3.0 earthquake struck near Perry, Oklahoma just about an hour ago.
In the old days, you would never think of Oklahoma as a place that was at risk for major earthquakes.
Unfortunately, those days are long gone.