Between four and five hundred “youths” swarmed the streets of Stuttgart, Germany, attacking police officers and looting businesses in riots the AfD linked to Antifa and mass migration.

In the early hours of Sunday morning, 19 police officers were injured, 40 business were attacked, and nine shops were looted by violent rioters in Stuttgart, following a drug search of a seventeen-year-old German boy by local police.

According to the police in Stuttgart, just 24 of the hundreds of rioters were arrested, seven of whom were under the age of 18. The police said that half of those arrested have German citizenship and the other were foreign nationals, however, the statement did not provide the ethnic backgrounds of the rioters.

The president of the Stuttgart Police, Franz Lutz, claimed that the riots were not political in nature, saying: “From the current perspective, we can rule out left-wing or even political motivation for these acts of violence. It was an unprecedented dimension tonight, from overt violence against police officers and massive property damage to looting,” he said, in comments reported by the German tabloid Bild-Zeitung.

This claim has been disputed by the right-populist party the Alternative for Germany (AfD), with the leader of the party in the Bundestag, Alice Weidel, claiming that the violence was a result of Antifa and what she termed “MigrAntifa” in the city.

Video footage from the riots allegedy shows a man saying “Fuck the police, Fuck the system”, as youths break the windows of a police van. 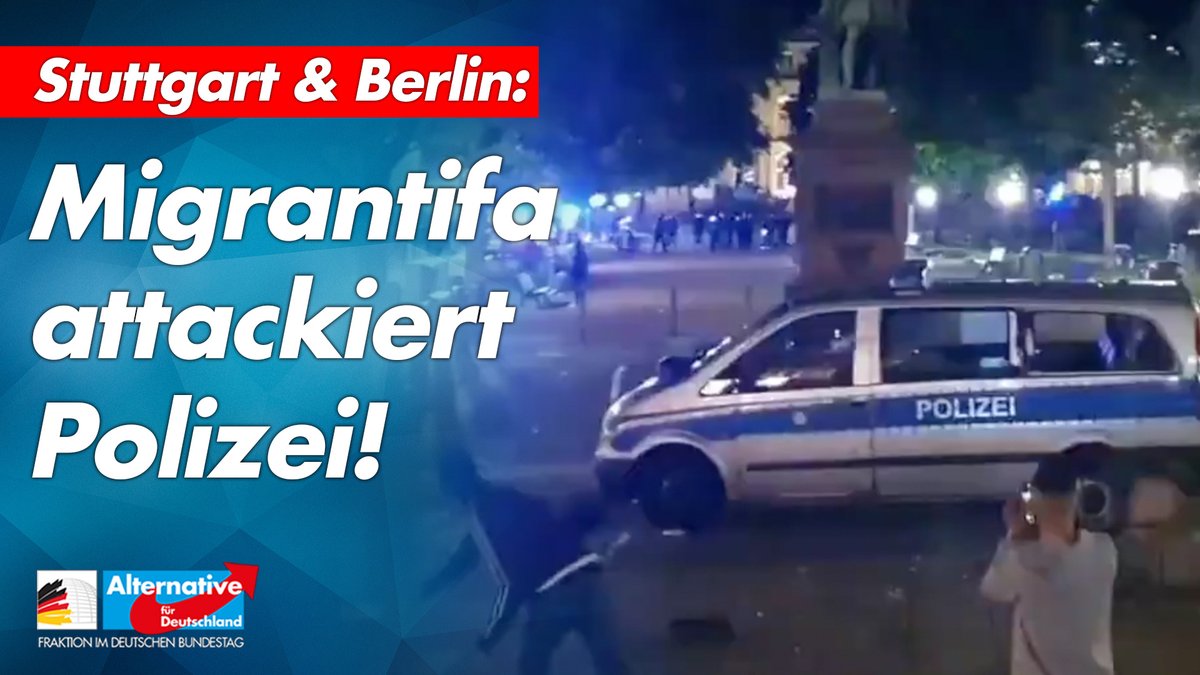 1,325 people are talking about this

On Sunday the Vice President of Stuttgart Police, Thomas Berger, said that he was shocked by the violence: “I have been a police officer for 30 years and have experienced a lot, but there have never been scenes like this in Stuttgart showing how violence is carried out here. I am shocked. I’ve never seen anything like it.”

In footage released on social media, a masked man is witnessed running up behind and jump-kicking a police officer who was attempting to apprehend another rioter. The vicious attack received raucous applause from the mob.

In response to the riots, Mayor Fritz Kuhn wrote that it was “a sad Sunday for Stuttgart,” adding that he was “shocked about the violent outbreak.”

The AfD blamed the “civil war” in Stuttgart on the massive influx of migrants to the city, noting that “it is no coincidence that it hit a city with a 44 per cent migrant population.”

“Without a political paradigm shift, such scenes will repeat themselves in Stuttgart and in other German cities. What we need is consistently controlled immigration, more police and a crackdown on the judiciary against such criminals. The old parties, however, seem to lack the strength and the will to do so,” the AfD added.

Arab clan gangs have threatened to kill police officers who attempt to enforce the law in Marxloh, claiming only sharia applies to them.

210 people are talking about this