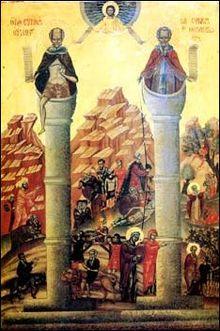 A stylite (from Greek στυλίτης, stylitēs, “pillar dweller”, derived from στῦλος, stylos, “pillar”, Syriac: ܐܣܛܘܢܐ‎ ʼasṯonáyé) or pillar-saint is a type of Christian ascetic who live on pillars, preaching, fasting and praying. Stylites believe that the mortification of their bodies would help ensure the salvation of their souls. Stylites were common in the early days of the Byzantine Empire. The first known stylite was Simeon Stylites the Elder who climbed a pillar in Syria in 423 and remained there until his death 37 years later.

Palladius of Galatia tells of Epidius, a hermit in Palestine who dwelt in a mountaintop cave for twenty-five years until his death.[1] St. Gregory of Nazianzus (Patrologia Graeca 37, 1456) speaks of a solitary who stood upright for many years together, absorbed in contemplation, without ever lying down. Theodoret assures us that he had seen a hermit who had passed ten years in a tub suspended in midair from poles (Philotheus, chapter 28).

Simeon Stylites and his contemporaries

There seems no reason to doubt that it was the ascetic spirit manifested in such examples as these which spurred men on to devise new and more ingenious forms of self-mortification and which in 423 led Simeon Stylites the Elder first of all to take up his abode on the top of a pillar. Critics have recalled a passage in Lucian (De Syria Dea, chapters 28 and 29) which speaks of a high column at Hierapolis Bambyce to the top of which a man ascended twice a year and spent a week in converse with the gods, but the Catholic Encyclopedia argues that it is unlikely that Simeon had derived any suggestion from this pagan custom. In any case Simeon had a continuous series of imitators, particularly in Syria and Palestine. Daniel the Stylite may have been the first of these, for he had been a disciple of Simeon and began his rigorous way of life shortly after his master died. Daniel was a Syrian by birth but he established himself near Constantinople, where he was visited by both the Emperor Leo and the Emperor Zeno. Simeon the Younger, like his namesake, lived near Antioch; he died in 596, and had for a contemporary a hardly less famous Stylite, Saint Alypius, whose pillar had been erected near Hadrianopolis in Paphlagonia. Alypius, after standing upright for 53 years, found his feet no longer able to support him, but instead of descending from his pillar lay down on his side and spent the remaining fourteen years of his life in that position. Roger Collins, in his Early Medieval Europe, tells us that in some cases two or more pillar saints of differing theological viewpoints could find themselves within calling distance of each other, and would argue with one another from their columns.

Saint Luke the Younger, another famous pillar hermit, lived in the 10th century on Mount Olympus, though he also seems to have been of Asiatic parentage. Daniel the Stylite lived on his pillar for 33 years after being blessed by and receiving the cowl of St. Simeon the Stylite. There were many others besides these who were not so famous, and even female Stylites are known to have existed. One or two isolated attempts seem to have been made to introduce this form of asceticism into the West, but it met with little favour. In the East cases were found as far back the 12th century; in the Russian Orthodox Church the practice continued until 1461, and among the Ruthenians even later. For the majority of the pillar hermits the extreme austerity of the lives of the Simeons and of Alypius was somewhat mitigated. Upon the summit of some of the columns a tiny hut was erected as a shelter against sun and rain, and other hermits of the same class among the Miaphysites lived inside a hollow pillar rather than upon it. Nonetheless, the life was one of extraordinary endurance and privation.

In recent centuries this form of monastic asceticism has become virtually extinct. However, in modern-day Georgia, Maxime Qavtaradze, a monk of the Orthodox Church, has lived on top of Katskhi Pillar for 20 years, coming down only twice a week. This pillar is a natural rock formation jutting upward from the ground to a height of approximately one hundred and forty feet. Evidence of use by stylites as late as the 13th century has been found on the top of the rock.[2] With the aid of local villagers and the National Agency for Cultural Heritage Preservation of Georgia, Qavtaradze restored the 1200-year-old monastic chapel on the top of the rock. A film documentary on the project was completed in 2013.[3]