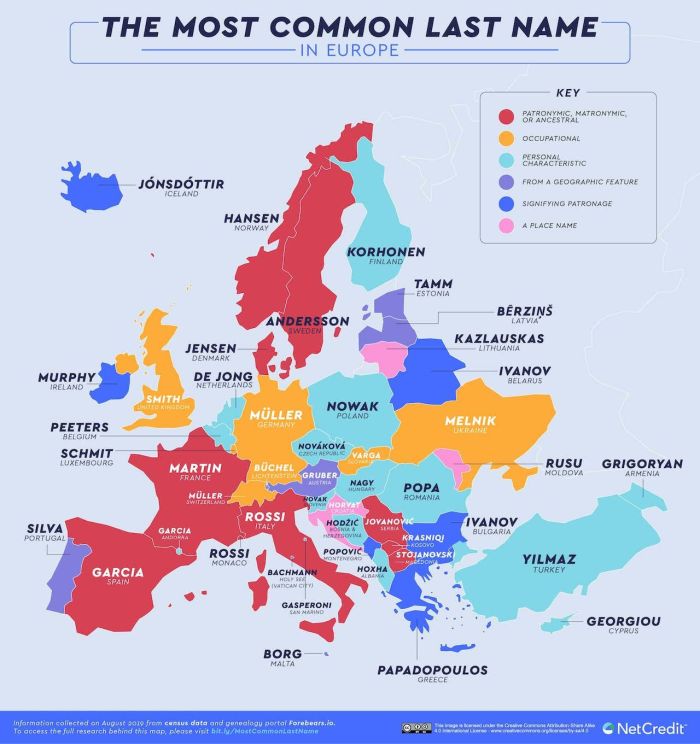 What exactly is the “Smith” of Luxembourg?

Hoxha
Derived from a Persian word khvajeh, which means “lord.”

Garcia
This independent country sandwiched between France and Spain has more Spanish-leaning names.

Gregoryan
The most common name in Armenia is taken from the proper name Grigor, from the Greek Gregorios — meaning “to be awake” or “watchful.”

Gruber
Austria’s most common name is taken from the Middle High German word groube, which means “pit” or “hollow.” Basically it refers to one who lives in a depression, hollow, or other lowered area.

Peeters
Taken from the name Petrus, which means “rock” or “stone.”

Hodžić
This name taken from the word hoza means “son of the lord” or “son of the master.” Its root is from the Persian word khawaja, meaning “lord” or “master.”

Ivanov
One of three countries where the most common name is a descendant of Ivan.

Horvat
Taken from Croatian word hrvat, which means “person from Croatia.” This would be like if the most common name here was actually Johnny America.

Georgiou
If you’ve traveled the rural countryside of this Mediterranean island then it’s not much surprise its most common name means “rustic” or “farmer.”

Novakova
When the most common name in your country comes from a Slavic word for “newcomer,” it must get confusing to know who has actually lived there a while.

Jensen
Shortened version of “son of Johannes.” Johannes is a version of John, Jean, and other variants, which means “Jehovah has favored me with a son” or “God bless this child.”

Korhonen
Gotta love those playful Finns, whose most common surname comes from the word korho, which literally means “deaf person” but is also used to describe someone who is clumsy, silly, or foolish.

Martin
Like Martinez, this name is derived from Mars, the Roman god of war and fertility.

Müller
Also Mueller, referring to one who mills grain. Any surprise this country’s good at beer?

Papadopoulos
Combination of papas, which means “priest” in Greek, and poulus, which means “son.” So we can assume Greek priests were not a celibate order.

Nagy
Hungarian word for “big,” referring to a large or powerful person.

Jónsdóttir
Fairly self-explanatory if you read it out loud, this means “daughter of John” in Icelandic.

Murphy
No surprise as this is also the most common name for any American bar that offers two-for-one shots of Jameson, Murphy comes from the Gaelic name Ó Murchadha, meaning “descendant of Murchadh,” a personal name meaning “sea-warrior.”

Rossi
Interesting to see the most common name of stereotypically dark-haired, olive-skinned Italians refers to a person with red hair and a ruddy complexion.

Krasniqi
A descendant from the Krasniqi tribe of northern Albania.

Bērziņš
Related to bērzs, the Latvian word for birch trees, this literally means “one who lives among birch trees.”

Büchel
From the Middle High German bühel — which loosely translates to “hill” — this name refers to someone living on a hill.

Kazlauskas
Name related to the familiarly-Polish Kozlowski, it literally means someone from any number of places called Kozłów.

Stojanovski
The “Stojanov” part of the name is of unknown Macedonian origin, but the “ski” suffix is the result of the government’s effort to make names sound more Greek.

Rusu
Refers to a person of Russian descent, like Ruski.

Rossi
One family can tip the scales in Monaco, as the 89 Rossis could be easily overtaken by the Lorenzis, who number 67.

Popovic
Not a nation of die-hard Spurs fans, this name is a mixture of the Serbian word for priest, pop, and the suffix “ovich,” which means “son of.”

Hansen
Old Norse word meaning “creators of annoyingly catchy songs.” Or it’s a derivative of Hans, which is an aphetic form of Johannes.

Nowak
Derived from the Polish word nowy, meaning “new.” Denotes a newcomer or someone new to the area.

Silva
This is close to the most popular name in Brazil too, meaning “person from a thicket.”

Gasperoni
From the Latin word gasparus, which comes from the Persian word kaspar, meaning “treasurer.”

Jovanovic
Meaning “son of Jovan,” another of the Jean/John/Johannes family.

Varga
From the Hungarian word for “cobbler” or “shoemaker.”

Novak
From Slavic word for “new,” meaning one is a newcomer.

Garcia
Almost 1.5 million people in Spain have this name from a Basque word for “bear.”

Andersson
Meaning son of Anders, which is ultimately derived from the Greek andreios, meaning “manly.”

Melnik
Russian occupational name for miller, or one who works with grain.

Smith
Guessing there were a LOT of people working with metal in old-timey England.

Bachmann
Exactly four people with this name live in Vatican City. If one more Graf moves in, it’ll drop to #2.

Source: Most popular last name in every country in the world