California’s politicians, bureaucrats, electric utilities and even celebrities have taken to using “climate change” as a multipurpose excuse for having done nothing to prevent deadly wildfires.

Doing nothing, at least nothing effective, has been a central public policy feature in the climate change debate, especially when it comes to wildfires.

The facts are clear: California’s deadliest year of wildfires has been decades in the making, with overlapping environmental rules, both state and federal, making fuel load reductions in forests and coastal chaparral nearly impossible, while hostility towards commercial timber harvesting has allowed a massive build up in tree density and brush with a concurrent reduction of access roads and firebreaks.

I first noticed that doing nothing was deliberate policy in 2007 when the Speaker of the California State Assembly gifted every member of the State Assembly with 3 metric tons of carbon dioxide emissions reductions from the Van Eck Forest Project. 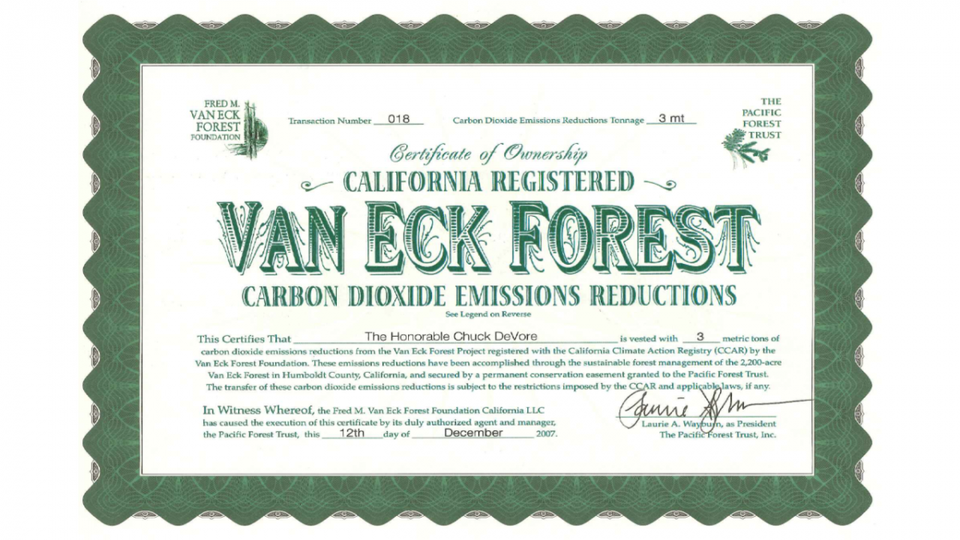 Fred M. Van Eck owned 2,200 acres of forest in Humboldt County, California, where he enjoyed personally managing his trees in a “sustainable” manner, harvesting some while maintaining the forest floor fuel load to reduce the fire threat.

The Pacific Forest Trust was selected to manage the late Van Eck’s forest in perpetuity, using the same forest management practices started by the investment funds manager. To make a little money on the side, the nonprofit sells carbon dioxide emissions offsets, claiming that the money given to them reduces emissions by funding their work that allows the forest to impound carbon dioxide when in fact, they’re doing nothing that Mr. Van Eck wasn’t already doing anyway—there is no net change. The practical result being this: people pay money for nothing other than a hokey certificate and a feeling of smug virtue at the purchase of an environmental indulgence.

The Pacific Forest Trust’s operation is relatively harmless. In contrast, California and the federal government have pursued wildland management practices with deadly consequences while cloaking their willful inaction to reduce the fire threat with the blanket excuse of climate change when the fires inevitably break out.

This pattern repeated itself in November when the devastating Camp Fire burst onto the town of Paradise in Northern California, virtually wiping it off the map. Combined with fires in the chaparral—brush and grassland—in Southern California, California’s latest round of fires killed at least 88 people (with 203 still missing) while destroying almost 19,000 structures, most of them homes.

Once again, President Trump weighed in with a tweet, observing that “There is no reason for these massive, deadly and costly forest fires in California except that forest management is so poor.”

Once again, the response from California’s elite claimed climate change was the cause. Gov. Brown fingered climate change as the culprit while some celebrities who lost homes in Malibu also blamed “Climate Change,” connecting it to “extreme weather events” and “extended drought.”

Even PG&E, California’s largest electric utility, brought up climate change, both as a way to curry favor with lawmakers—along with almost $10 million in political donation cash and lobbying—as well as to shift blame away from their power line maintenance practices onto something that they couldn’t control—the weather. Sticking to the party line, the publicly regulated utility wrote that large fires were expected to increase “… due to extreme weather and climate change. … We must continue to work together to ensure ongoing investment in climate resiliency and clean energy…”

Being publicly regulated, PG&E enjoys a guaranteed rate of return—meaning that generating more costly renewable energy does two things for them: it generates higher profits and it generates political capital that has largely immunized them to their deadly negligence.

Regarding climate change and California, the fact is the region was subjected to extended periods of drought long before industrialization. Some scientists connect this natural cycle to the sun. Further, California gets the vast majority of its moisture during five months from November to March. By the summer months, vegetation is subject to being quickly dried out by the hot, low-humidity winds that are a common California phenomenon. Climate change doesn’t alter this fact.

What’s changed in recent decades is the amount of fuel available to burn during hot, dry and windy conditions and the number of people with homes in the so-called wildland-urban interface, whether on the edge of the forest or in the coastal chaparral.

As for forest management, it’s not as if the experts didn’t see the problem looming on the horizon. In a 2006 report, the Western Governors’ Association warned that, “…over time the fire-prone forests that were not thinned, burn in uncharacteristically destructive wildfires… …In the long term, leaving forests overgrown (makes them) prone to unnaturally destructive wildfires…”

During last summer’s wildfire outbreak, Assistant Chief Mike Marcucci of CAL FIRE, the state’s firefighting agency, said, “It’s a daunting task that we’re working with some of our cooperators (i.e. federal and local authorities) to make sure we can get some of those trees out of the way to not add to some of the fuel,” noting that years of not conducting prescribed burns led to unnatural tinderbox conditions.

The fire chief might have added that the opposite is true as well—fire suppression combined with a virtual cessation of the timber harvest led to overcrowded forests more vulnerable to drought, disease and insects. 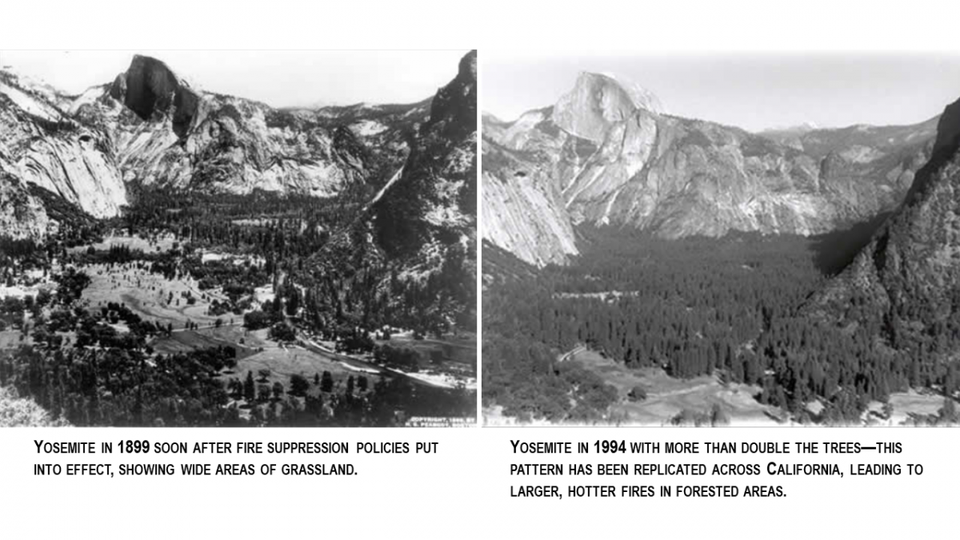 In Yosemite, as in much of California’s forests, tree density is far higher today than it was 120… [+]

While dangerous forest management practices can be blamed on both federal and state environmental policies, the coastal chaparral areas in Southern California are a different matter. Here, proscribed burns are needed to reduce the fuel load along with the rigorous maintenance of a 100-foot “defensible space” clearance around homes situated in very high fire severity areas such as Malibu. It’s this defensible space that appeared to be missing in the celebrity homes that burned in November—though one can’t blame celebrities for wanting the privacy and beauty that dense vegetation around their homes might bring.

Lastly, the increasing amount of housing in the wildland-urban interface—by some estimates, almost half of the housing stock built in the last few years in California—is largely being driven by the need to build in lower-cost areas outside of the urban cores. Environmentalists are hostile to this new construction and resist policy changes that facilitate it. Instead, they’d like to see people driven off their wildland property through a combination of strict land use policies, a fire tax, and the loss of fire insurance.

And the bills signed by Gov. Brown after the end of the 2018 legislative session in September represent a stark break from past fire management practice.

SB 1260, passed on the last day of session on August 31, makes three key policy changes: It makes it easier for California and private parties to conduct prescribed and controlled burns, it largely removes air quality impediments to preventive burns; and, it addresses the issue of environmental quality concerns and lawsuits slowing or stopping needed burns.

The other bill, SB 901, also passed on the last day of session, appropriates $190 million a year to “improve forest health and fire prevention” and use prescribed burns to reduce the fuel load.

Had these policy reforms been in place for the past 20 years, along with parallel federal policies, there is no doubt California would have prevented recent years’ steep loss of life and destruction of property.

Going forward, it remains to be seen if these two new laws can be fully implemented in the face of California’s entrenched bureaucratic inertia and the frequent resort to legal action by professional environmental advocates.

Regardless, the passage of these bills and their signing into law by Gov. Brown are an admission by the state’s liberal leadership that Pres. Trump was correct in his criticism of the role bad environmental policy played in California’s worst wildfire season.